The Concocting of Chasms: Divide-and-Conquer as Political Program

Part of the problem I have with this new dialogue on the tone of the national rhetoric is that everyone, people on both sides of the political divide, assumes that we are all polarized. It's not a new position. People have been thinking in these terms for at least the last 25 years, but it turns out, people have been wrong for the last 25 years. It's been called the Culture Wars, and the assumption goes something like this: we are divided, down the middle and irreconcilably, over a number of social issues.

Let's just take attitudes about how much the nation is spending on welfare as an example (from GSS 2004 data). Here is what we might expect to see if we really are as polarized on the topic: 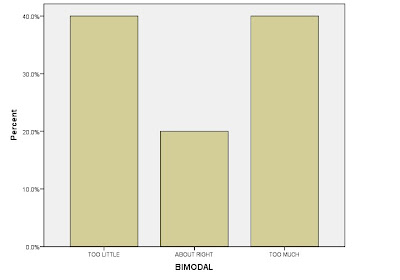 This is what we call bimodal; there are in effect two separate groups and very little middle ground.

Here is what we actually see: 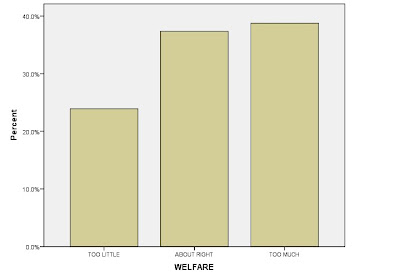 Surprise, surprise. The distribution is fairly flat (with a slight negative skew). But how could that be? When I turn on the TV or the radio, that's not what I hear. And, that's the problem. The latter chart above simply doesn't sate the public's lust for contention. That's right: the same thing that gets people to tune into Jersey Shore keeps people returning to "journalistic" media. We like a good fight, and the evening news, Fox News, and MSNBC are happy to oblige us. On the vast majority of issues, we are not nearly as divided as we are led to believe.