The Complexity of Abortion Attitudes

It turns out that when we don't force them to limit themselves to a single label, 43% of people in the U.S. claim to be both "pro-choice" and "pro-life." This has very important implications for pollsters, but it also tells us about how people are thinking about abortion. We, as social scientists, have been getting it wrong for a while. We've assumed that pro-choice and pro-life exist on opposing ends of a single continuum on which most people fall somewhere in the middle depending on the circumstances. For example, people tend to agree that legal abortion should be an option for rape victims; they also tend to agree that it should not be an option simply for the sake of expediency.

In fact, pro-life and pro-choice are two independent and mutually exclusive questions. The former is about the definition of life itself; when does life begin (and for that matter end)? The latter is about gender equality; should women be given a choice over when and if they reproduce? Here is a chart to draw on the complexity: 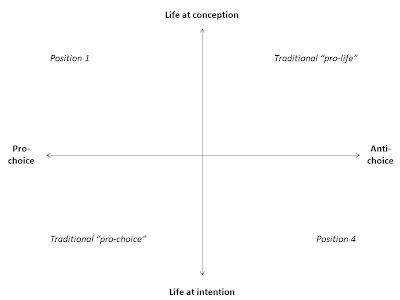 The "Traditional 'pro-life'" position (2; upper right) is that life begins at conception and that women do not have a "choice." The "Traditional 'pro-choice'" position (3; lower left) is that life is about intention and that women should always have a choice. This opens up two additional positions, however. Position 1 (upper left) is occupied by people who claim to be both "pro-choice" and "pro-life." Position 4 (lower right) includes those who claim neither label. It is these seemingly-contradictory locations that are the most telling, and we don't know much about these folks, even though they appear to make up a plurality in the U.S. We would be well served by serious qualitative research among these folks.