I got a couple great questions from "Daniel," who happens to be a colleague of mine, in the comments to yesterday's post. I'll take up the first of them here today. He asks, in part, about my objection to the timing of the withdrawal deadline. One of my primary objections to the ability for students to withdraw from courses is that it contributes to grade inflation, that the process exists at all. I'll offer up data from my classes as an example. (The data are publicly available from the University System of Georgia.) Below, I'm posting two charts. Both are grade distributions from all of the courses I've taught over the last three years. The first includes only those people who completed the course, while the second also includes those who withdrew from the course. (These data do not include those who "dropped" the class within the grace period at the very beginning of the semester.) I make one important assumption here for the sake of simplicity, that those who withdrew would have otherwise earned an F in the course. (Of course, I don't believe that would be the case; to the contrary, I believe that most would have been able to earn passing grades which makes it all the more infuriating.) 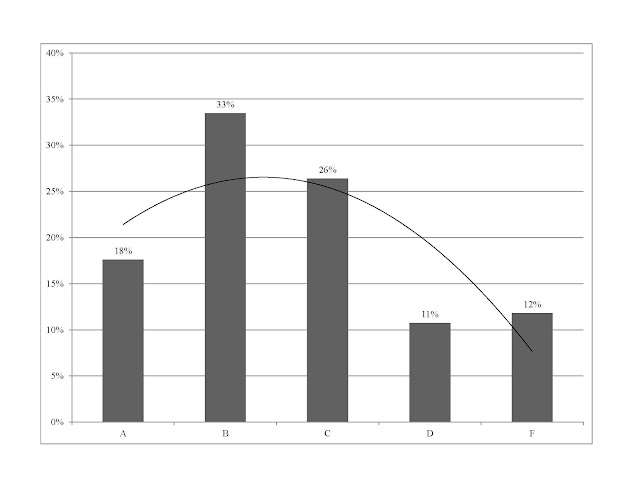 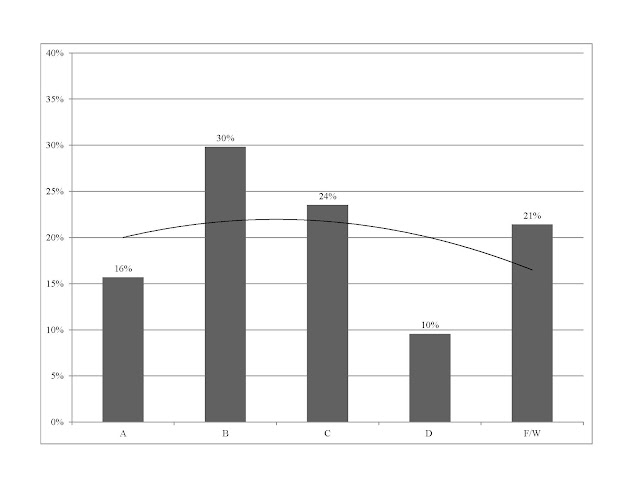 What we can glean from the difference between the two charts is that the W's change the distribution. By allowing withdrawal, we mask the rarity of certain scores, thus devaluing them. For example, ignoring W's leads us to believe that one is about 2 percentage points more likely to receive an A than is the case. B's are even more deceiving, appearing about 4 percentage points more likely.

My larger point is not that we should make A's artificially rare or that grades need to be more normally distributed; instead, I'm arguing that W's fundamentally devalue one measure of educational success, a measure that matters for graduation, for grad school applications, and to potential employers, not to mention mattering for students' self-evaluation of progress.