UPDATE (3/19/2013): I have updated the tables and figures below to incorporate the newly available GSS 2012 data here. While the analysis below is generally still applicable, the models have changed.
--

In the last post, I laid out the data. Here, I'll present some results. The analysis is based on multinomial logit regression. The dependent variable is Supernatural Disposition (both/religious not spiritual/spiritual not religious/neither). The independent variables (IV) of primary interest, which I will take up in a later post, are measures of attitudes regarding whether other people can be trusted, take advantage, look out for themselves, and a measure of whether the respondent has been unemployed in the last ten years. I control for year, gender, race, education, and income. Here are the various models with the IV p-values:

Income is insignificant at the .05-level and is dropped from subsequent models. While the "people take advantage" measure loses significance when the other measures of alienation are included, it is significant when the other measures are not included, and the alienation measures are jointly significant so all four are retained in the final model. All of the results I present below and in future posts (unless otherwise noted) are from model 8 above and hold all other variables at their means. Here are the overall probabilities for each Supernatural Disposition category: 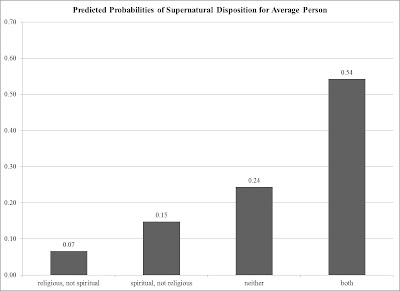 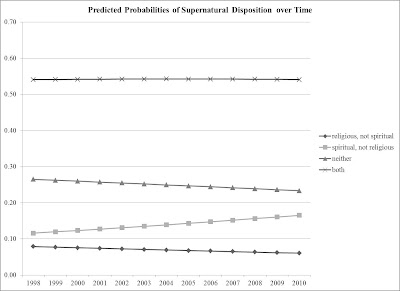