Elections Have Consequences—for Some of Us

The Times has a nice review/summary of a new book, Winner-Take-All Politics: How Washington Made the Rich Richer—and Turned Its Back on the Middle Class, by political scientists Jacob Hacker of Yale and Paul Pierson of UC-Berkeley. Here's a selection:

...[T]he economic struggles of the middle and working classes in the U.S. since the late-1970s were not primarily the result of globalization and technological changes but rather a long series of policy changes in government that overwhelmingly favored the very rich.

“We’re not arguing that globalization and technological change don’t matter,” said Professor Hacker. “But they aren’t by any means a sufficient explanation for this massive change in the distribution of wealth and income in the U.S. Much more important are the ways in which government has shaped the economy over this period through deregulation, through changes in industrial relations policies affecting labor unions, through corporate governance policies that have allowed C.E.O.’s to basically set their own pay, and so on.”

Most troubling, though, is that this growing inequality seems to be systematic and not an artifact of partisan politics. Here is a chart based on some research from Princeton political scientist Larry Bartels: 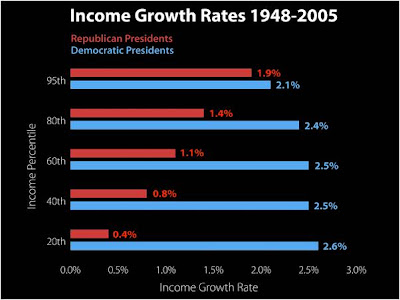 Having a Democrat in the White House is better for everyone save one group: the rich, but the surprising thing is that the rich do well regardless of who the president is.

For more on this, check out the book Dollars and Votes: How Business Campaign Contributions Subvert Democracy.