I read a thought-provoking piece in the NYTimes today. Here is my response.

Unwittingly, self-identifying as being of more than one race could diminish one's identification with any meaningful group with which s/he might have a shared interest; moreover, the hegemonic push that paints multiracial identification as somehow more accurate and even socially desirable has the effect of driving a wedge between people who erstwhile would have been compatriots in a shared cause. Imagine someone who would have been forced to identify as black in the past but who is now black/Hispanic. In practice, this means the person is no longer black or Hispanic but of some newfound hybrid which is its own thing. The result is that all identities become fragmented to the point of becoming ineffectual.

We've been doing the same thing with class identity in the US for quite some time. What class are you? lower? working? middle? upper? Here's what people tell us: 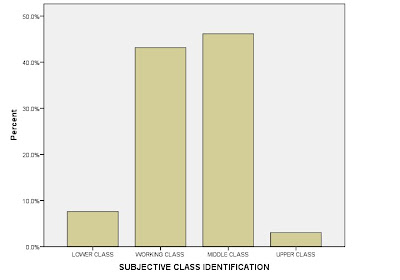 Most people want to be middle class. But, are they? Here is what their income distribution looks like: 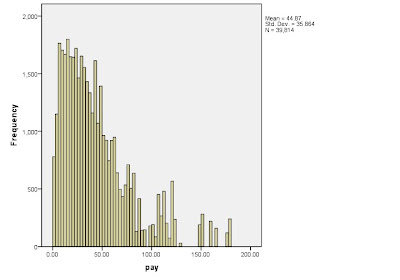 By encouraging people to view themselves as "middle," we give them a false consciousness. I worry that the same process is happening with race now.