As I keep telling you, I'm enjoying my free month of Netflix. Yesterday, I finished Ken Burns' The War. I am not a war buff, and I'm not all that interested in military strategy or history, which is probably why I didn't watch this film when it originally aired on PBS several years ago, but I must say, it is a great documentary. Burns and company are adept at taking would-be dry material and infusing it with personal significance. Mills wrote that sociology is the intersection of history and biography. By this definition, Burns is a sociologist par excellence.

I was struck, however, with the way that several who were interviewed for the film spoke about the encounters between returning veterans and civilian women. We are all familiar with the iconic photograph from Life magazine of the kiss in Times Square on V-J Day. 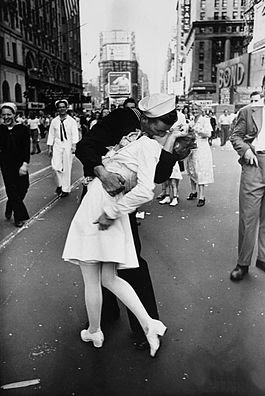 For many, particularly of that era, it invokes feelings of pride and nostalgia. From the contemporary perspective, however, it should invoke a tinge of horror. In the final episode of The War, a woman recounts a memory of being mobbed at a train depot by servicemen returning from the Pacific Theater. She had to lock herself in a room with a girlfriend until an officer corralled the men back onto the train. She remembered the tale with a smile and a laugh, but it was clear that at the time of the event, she was quite terrified. A veteran in the same episode recalls how one could "cop a feel" stateside without fear of reproach or punishment.

Today, we would define such things as sexual harassment at the very least but more accurately as sexual assault. I'm wrestling with whether the dismissal of these acts of deviance was/is an effect of the historical (and highly patriarchal) era or of the suspension of norms during wartime. I suspect that it is an interaction effect of both. Regardless, it's best if we stop romanticizing the whole thing. Men were kissing and groping--and undoubtedly worse--women against their will. By any definition at any time, that is harmful.