The One Constant through All the Years, Ray, Has Been Statistics

Last night, Matt Cain threw a perfect game. It was the first in the history of the Giants franchise and only the 22nd in 132 years. However, it's already the second of this season. (The first was thrown by the Chicago White Sox' Philip Humber. Go Sox!) There were two perfect games thrown in 2010, too. The last time before then that two perfect games were thrown was 1880! It looks like the rate at which perfect games are being thrown is increasing. Let's check it out. 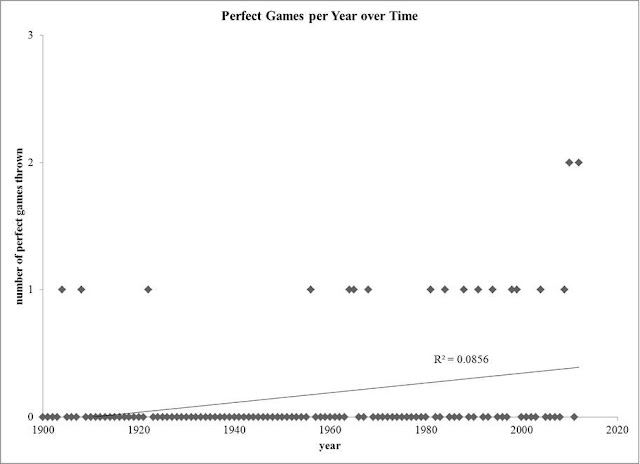 Indeed, there has been a significant (p=0.002) increase in the number of perfect games thrown since 1900, when the "modern era" of baseball is generally agreed to have begun (R-squared ≈ 0.09). On average, there have been about 0.004 more perfect games thrown per year which equates to an increase of about one additional perfect game per season every 262 years. The increase is small but real. 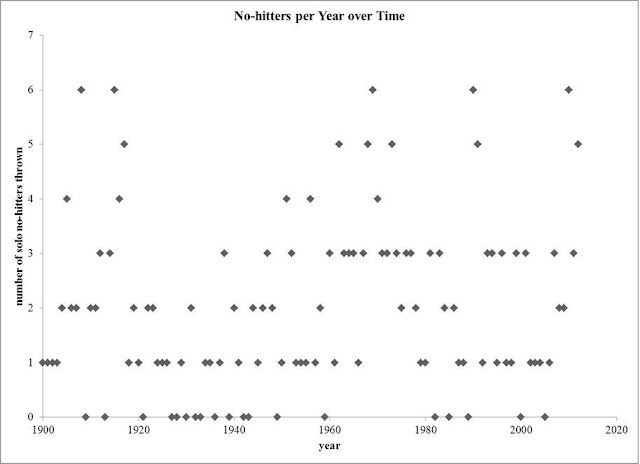 In fact, there has not been a significant (p=0.132) increase in the number of no-hitters thrown since 1900. No-hitters happen rather randomly over time.

How to make sense of all this? Why would there be an increasing number of perfect games but not no-hitters? There seem to be four variables that could possibly account for it: changes in pitching, changes in batting, changes in umpiring, and technological changes to the game (e.g. ballpark design or baseball manufacturing). My hunch is that it has more to do with how pitchers are trained and how the game itself has changed than in batting or umping, but that's beyond the scope of this post. If you have a theory, please feel free to put it in the comments below.

--
For stats nerds only: 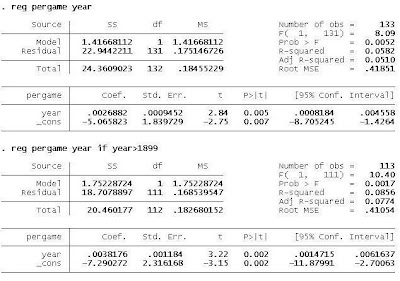 Dataset compiled from here, here, and here and is available on request.

UPDATE (1:48 PM): I only include solo no-hitters in the data. There have been several multiple-pitcher no-hitters, but those seem like a different beast.