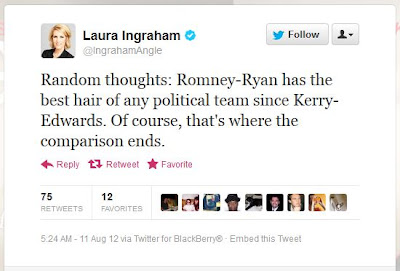 No stranger to controversy involving race, Ingraham wades into some pretty dangerous territory as there are hidden racial implications to this. Barack Obama has "African hair," and African Americans have had (more accurately, have been given) a very complicated history with their hair. Check out this trailer for the Chris Rock documentary Good Hair (h/t SocImages):


Here is a great piece called "A Girl Like Me" with some frank discussion from black girls about their hair:

The implication of Ingraham's tweet is that Pres. Obama has "bad hair." My guess is that the racism is unintended, but while subtle and clouded, the implications of this language are real. While it may not be obvious to whites, it is patent to people of color who are not privileged to have hair that is deemed desirable and must deal with these kinds of statements regularly.