Who Are the "Religious But Not Spiritual?"

There's been a lot of talk lately about the growth of the religiously unaffiliated and, in particular, of those who claim to be "spiritual but not religious." There's no dearth of scholarship on this area of increasing Sheilaism. I'm interested, though, in the folks who claim to be "religious but not spiritual." Here is just an exploratory look at this group using logit regression of GSS data. I created a dummy variable for those who simultaneously claim to be slightly spiritual or not spiritual (SPRTPRSN) and moderately religious or very religious (RELPERSN). 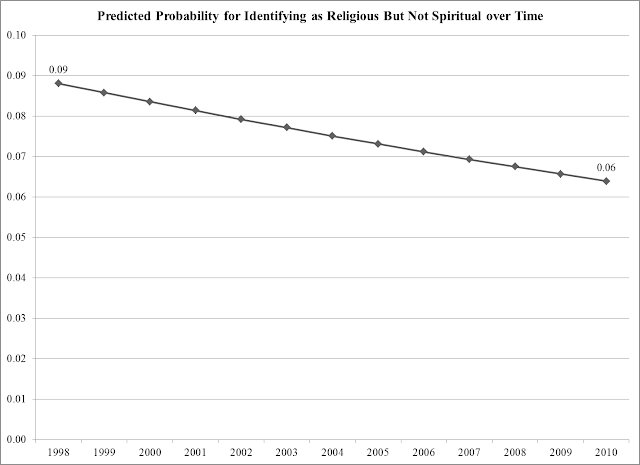 While the move is small (only 2 percentage points over 12 years), the variable is significant at the zero-order (p=0.008) and is robust when controls are added. People are increasingly less likely to claim to be "religious but not spiritual," but that these people exist at all is somewhat surprising. I'll be looking more at this in the future.