Critique of "SES and Prosperity Gospel" in JSSR

Having one's research scooped sucks. Having one's manuscript rejected by a journal only to have them publish someone else's article over three years later that looks remarkably like his manuscript sucks even more. Having that published research get the story wrong sucks the most.

OK, OK, so I'm bitter. Seriously, though, I'd like to offer a critique of Scott Schieman and Jong Hyun Jung's "'Practical Divine Influence': Socioeconomic Status and Belief in the Prosperity Gospel" from the December 2012 (51:4:738-756) issue of the Journal for the Scientific Study of Religion.

You can see my previous posts about the Prosperity Gospel here, here, here, here, and here. You can also take a look at my paper on the topic here (currently under review). The two main differences between my paper and theirs are that they use a different theoretical framing and they use different data. The former is a rather negligible difference, but the latter is substantial. Let me elaborate.

Their data limit their analysis to two dependent variables that measure only belief, while my data, though limiting in other ways, includes multiple measures of belief as well as a measure of belonging. The Prosperity Gospel is not only about doctrine but also about affiliation, and the Pew data simply do not address this.

I note three major problems with the "SES and Prosperity Gospel" paper:

Second is the authors' statistical method. They use OLS regression, a tool that is inappropriate for analysis of categorical dependent variables. Moreover, they treat discrete categorical independent variables (e.g. income and education) as continuous interval-ratio variables. Together, this leads them to over-simplify in concluding that "education and income have negative and mostly independent associations with belief in the wealth and health gospel" (my emphasis). (A multinomial logit model that I threw together using their data but recoding education, income, and race into several dummy categorical variables saps the significance from virtually all of the income variables.) One half of the big story is that income is not (as) predictive of Prosperity beliefs (as some have assumed). (Yes, I'm sure I read that somewhere before.) The authors miss this, in part, because of their methods.

Finally, another major finding is buried in the authors' control variables and never addressed in the text of the paper: race is the strongest and most highly significant predictor of Prosperity belief. (Yes, I'm sure I read that somewhere before, too.) The authors inexplicably miss that it's all about being black.

Contrary to the authors' claims, Prosperity belief is more about race and education than income and education. See the two charts I include below. The first is from my own research and makes it clear that education mitigates the major effect of being black. The second is from my own quick analysis of they authors' data, which shows a similar pattern, even though the questions are not exactly the same.


As you can seen in the two figures below from my own quick analysis using the Pew data, race is the major factor at play. 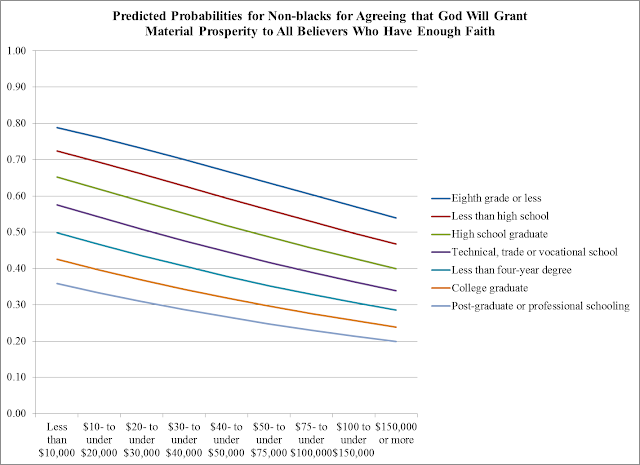 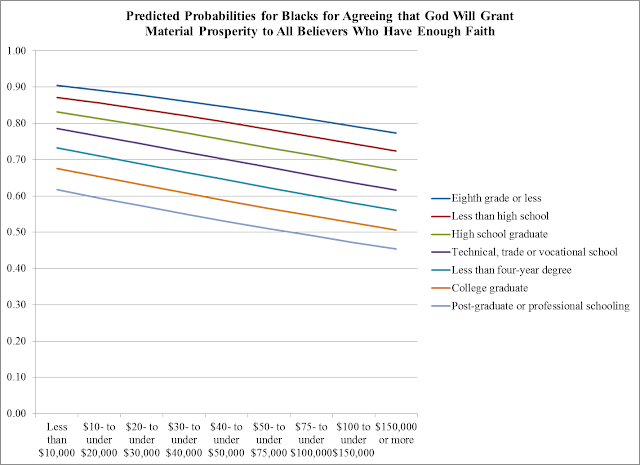 
The data were downloaded from the Association of Religion Data Archives, www.TheARDA.com, and were collected by Pew Forum on Religion and Public Life.