I noted before that the election of a pope from the global South could mean a pope of color. David Gibson thinks that's a long shot. Here is one reason why: 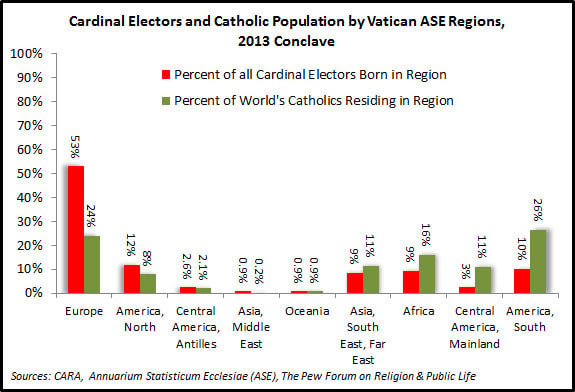 Europeans are overrepresented in the College of Cardinals, the group of elite bishops who choose the pope. As long as Europeans have numbers, it's probably safe to assume that a Southern pope, and thus a pope of color, is unlikely.

Setting that aside, what would be the consequences of a Southern pope? First, since popes tend to appoint from within their social networks, we might expect that a Southern pope would appointment of more Southern cardinals. This could have long-term implications for the Church. Second, a Southern pope and/or pope of color, while symbolically powerful, would not likely bring substantive change to the Church. Several of the African cardinals are hyperconservative, and the Latin cardinals are only slightly more moderate so chances are that the trajectory set by B16 would be continued.

Gibson does point to an interesting cultural disadvantage to non-European contenders: language. Most of the European cardinals are Italian and are privileged to speak Italian in and around Rome. I'm not exactly sure if this is a terribly large factor.

One thing that this succession is reminding us all of, though, is that the history of power in Roman Catholicism is very much about geography. It starts as a pissing match between the See of Rome and the Eastern patriarchs. Today, it continues as a growing laity in the South controlled by a group of elites in the North.