UPDATE (3/19/2013): The "Predicted Probabilities for Being Fully Integrated by Year" figure below is wrong. I have corrected it here. This invalidates the analysis below as well.
--

Alienation is a pretty good predictor of supernatural disposition, particularly for identifying as both religious and spiritual or neither religious nor spiritual. Inasmuch as religious/spiritual identification is about institutionalism and knowing that the United States has been becoming increasingly anti-institutional, we might suspect that the effects of alienation would have changed over time. Here are those results: 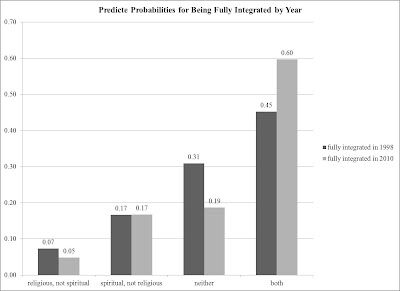 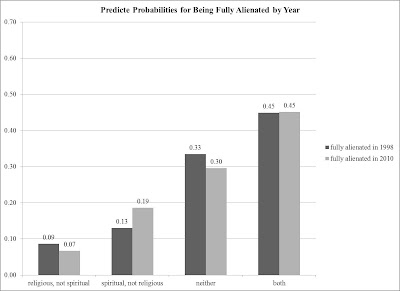 What is particularly striking is how the effects of being fully integrated have changed over time. Being fully integrated in 2010 meant than one was considerably more likely to identify as both religious and spiritual and less likely to identify as neither religious nor spiritual than in 1998. Over time, integration has been increasingly differentiating the neither's from the the both's.