These are pictures of the same historic figures. What difference jumps out at you? 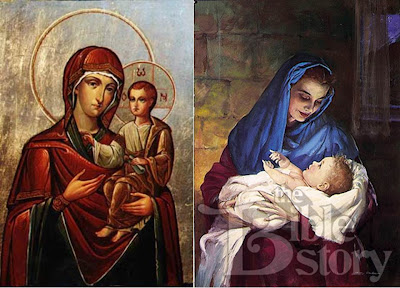 If you're like my introductory students, you'll note that while the more recent depiction of the baby on the right (i.e. Jesus) is fairly realistic, the ancient one on the left is oddly stylized. "He looks like a shrunken man," students will often say. And, indeed, that is the very point I use these images to convey to them: in the past, children were seen as little adults. This was consistent with the view that children were assets in an agrarian world, extra hands to help around the farm, as it were. It isn't until the Victorian Era that our modern notion of childhood as a protected part of the lifecourse developed. Industrialization meant that children became competition for adults in the labor force so children were forced out of the workplace as a reserve labor force with child labor and compulsory education laws, which made them liabilities. As a rationalization of this altered notion of the lifecourse, children then must be conceptualized as vulnerable, and this carries over into how they are depicted in popular culture and, as we see above, in art. If you need the kids to help with the daily work, you tend to see them as "shrunken adults"; if you need kids to stay out of your factory, you tend to see them as little helpless balls of pudge.* I've found this to be an excellent way to teach about the social construction of childhood and family.

--
* - Seriously, contrary to popular opinion, babies look odd. As a former professor of mine used to say and as I now pass on to my students, imagine a baby blown up to adult proportions; that thing would be ugly and terrifying!