Science vs. Religion: Why the Stark Differences in the Gap between Opinions of General and Personal Conflict?

Here is the chart from the publication regarding opinions about conflict between personal religion and science:

A similar pattern exists here for white Evangelicals, the unaffiliated, and regular attenders--except in the opposite direction! I created the following chart, which shows the percentage point difference between the opinions of conflict generally and conflict with one's personal religious beliefs: 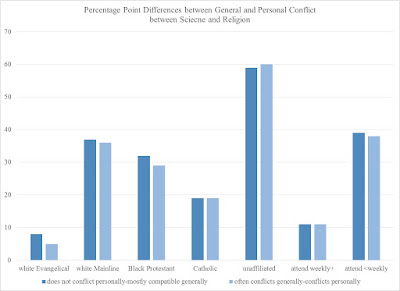 What to make of all this? Here are my speculative explanations:

Since we know that they typically have conservative theo-political beliefs, it's likely that white Evangelicals and regular attenders hold a belief of "science" that is inconsistent with scientific consensus. Since this is the case, white Evangelicals and regular attenders simply don't observe any conflict socially or individually between "science" and religion.

The unaffiliated, on the other hand, are more likely to hold beliefs about science that are consistent with scientific consensus and to note that some large, vocal groups (e.g. Evangelicals) hold "scientific" views that are at odds with the consensus. Thus, the unaffiliated observe pointed conflict socially, but very little personally, between science and religion.

An alternative interpretation (though I find it highly unlikely) is that white Evangelicals simply find the societal claims of a science/religion divide overblown and that the unaffiliated exaggerate the conflict that others, like Evangelicals, actually experience and perpetuate.